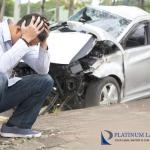 Charges After A Car Accident -- What Are Your Rights In NSW?

By Ranjan Ratnam for Platinum Lawyers|November 30, 2021
Security License Reassessments
It is essential to understand what charges can result from a traffic accident in Sydney, NSW as a driver. You must follow strict requirements when you are involved in a traffic accident on public roads.
These rules cover exchanging details with the different motorists involved, cooperating with police and assisting injured people. Several charges can occur after a road accident in NSW. In this article, we will summarise these offences and penalties.

What Are The Offences Associated With Road Accidents In Sydney?
The Road Transport Act 2013 requires the driver involved in a traffic accident to stop and provide all necessary assistance in their ability to any injured people at the scene. Failure to do the same may result in 18 months' imprisonment and a fine of up to 30 penalty units (A$3,300 at the time of writing)
The Crimes Act 1900 declares that if a person sustains grievous bodily harm, a severe and permanent injury, the driver who fails to stop and assist them may get imprisonment for up to seven years.
The Road Rules 2014 needs drivers involved in a crash to provide their name and address, the auto's registration number, and any other information identifying their vehicle to the other driver(s) affected in the accident.
When asked, drivers must provide the same information and details about the accident to the police if anyone is killed or injured. Failure in doing the same may result in a fine of up to 20 Penalty units ($2,200 at the time of signing).

Driving unregistered or uninsured
Traffic laws in Sydney require every motor vehicle to be registered. The highest fine is 20 penalty units ($2,200) for driving an unregistered car.
Under section 7 of the Motor Vehicles (Third Party Insurance) Act 1942, operating an uninsured motor vehicle on public roads is an offence. A driver can be fined up to A$550 under the Motor Vehicles (Third Party Insurance) Act 1942 and A$2,200 under the Road Transport Act 2013.

Driving suspended or unlicensed.
The penalties and charges that apply to unlicensed/suspended drivers in Sydney are listed below.

Unlicensed driving: Fine of up to A$2,200 and the court's consideration to disqualify the driver from driving

Disqualified driving: Fine of up to A$3,300 and /or 18 months' imprisonment. Also, an automatic 12-month extension of the licence disqualification term.

Driving with a cancelled or suspended licence (apart from non-payment of a fine): Fine of up to A$3,300 and /or 18 months' imprisonment with an automatic 12-month disqualification term.

Driving with a cancelled or suspended licence for non-payment of a fine: Up to A$3,300 and /or 18 months' imprisonment with a three-month disqualification term.

Causing physical harm due to Negligent driving
The offence of causing bodily injury due to the dangerous driving of a car includes negligent driving. Negligent driving is not specified in the Road Transport Act 2013; however, the courts have held that it involves driving in a manner that falls short of the standard requirements of an ordinary driver.
If a motorist drives carelessly and causes death, they suffer a penalty of a fine of up to A$3,300 and 18 months imprisonment. Negligent driving, which causes severe bodily harm, attracts a maximum sentence of 20 penalty units ($2,200) and jail for 9 months.

Dangerous driving causing injury in Sydney
The Crimes Act also carries hefty penalties for drivers who cause the death of another person in an accident when the motorist was under the influence of alcohol or drugs, driving at a critical speed or in a hazardous manner. This is known as dangerous driving.
A motorist sentenced to dangerous driving faces a maximum penalty of 10 years imprisonment. If the driver surpassed the prescribed alcohol concentration, was driving higher than 45 km/h above the speed limit, was escaping police chase, or was heavily impaired by drugs, the offence is complicated. The maximum penalty reaches 14 years' imprisonment.

Your rights and obligations
You have a universal right to remain silent when approached by police. However, you must provide your name and address and Australian driver's licence details if required by police at the crash scene. Failure to do so may draw a fine of up to 20 penalty units ($2,200).
You may also be questioned about the details of the accident. It is always sensible to comply with a regulation given by a police officer. Nevertheless, if you have not been arrested, you do not have to go with the police to the station for interrogation. You should check with the officer whether you must answer or comply before doing so and check these obligations with your lawyer.

Contact Platinum Lawyers For Assistance Regarding Road Accidents
If you were ever involved in a road accident, you know how difficult it can get to go through the whole questioning process with the police. Especially when you are not at fault. On top of that, there's another headache of handling your accident damaged vehicle. You can always consider Selling Accident Cars For Cash. You might get a fair deal. For all the other legal matters, the expert team of Platinum Lawyers is there to help you out.

Call (02) 8084 2764 to get in touch with us.
The above information is just a personal opinion and not to be referenced and considered as a service

Conveyancers Sydney›Platinum Lawyers›Articles›Charges After A Car Accident -- What Are Your Rights In NSW?