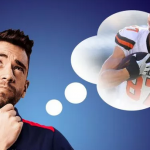 From Adelaide Plumber to NFL Player

By Metropolitan Plumbing|November 15, 2020
Matt Leo was six months shy of completing his Adelaide plumbing apprenticeship when his world was turned upside down by the possibility of a career in the NFL.

The 27-year-old currently plays for the Philadelphia Eagles after he was drafted as part of the NFL’s International Player Pathway program, but his previous life as an Adelaide plumber was much different.

From clearing blocked drains to installing hot water systems, Leo did it all as a plumber – but he always had other ambitions on his mind.

At the start of his apprenticeship, Leo watched a Super Bowl during his lunch break and became enamoured with American Football.

It was that moment that became entrenched in his memory and started his quest to become an NFL footballer.

Before long, Leo hit breaking point as a plumber after he was forced to fold his 6-foot-7 frame into a tight space on a 43-degree day whilst working on a bridge to the Adelaide Oval over the River Torrens.

He turned to his colleague and said: “I’m too big to be doing this, I miss sports, and I should be playing sports still.”
Standing at 201cm tall and weighing in at 125kg, Leo was not designed for plumbing.

He quit his job as a plumber and moved to the US to pursue a scholarship with the Arizona Western Community College.

He impressed so much in Arizona that he was eventually transferred to Iowa State’s division one football program.

If he impresses he could make the Eagles’ roster and play regular-season football or he could spend the entire season in the team’s practice squad.

But Leo is used to overcoming the odds.

As a plumber, he would regularly spend days on end digging to lay pipe in 43-degree weather. He’s crawled on his stomach through thick sewage under houses. He’s been soaked with grease and had full toilets with all their business flushed on him.

If any of those experiences sound appealing to you or you are interested in following in the footsteps of Leo, you can think about joining our plumber Adelaide team.

Over the last five years, the number of people in Australia working as a plumber grew significantly and that number is expected to continue to grow.

Becoming a plumber in Adelaide is a challenging, but rewarding, process. Once you are a qualified plumber, you will enjoy benefits like no day ever being the same, financial gain and the ability to work for yourself.
Like  ⋅  Pin to Ideaboard  ⋅  Share